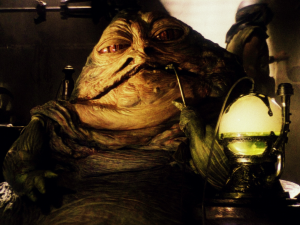 Jabba the Hutt smoking a pipe Star Wars Return of the Jedi.

If the mountain won’t come to Jabba, Jabba will get a bounty hunter to go to the mountain and bring it back frozen in carbonite.

Jabba the Hutt, a riddle wrapped up in an enigma, wrapped up in a gangster with an emotional eating problem. Anyone born in the last 30 years should know that in Return of the Jedi, Princess Leia strangles Jabba the Hutt with the chain she has been attached to him with. You can’t really blame Leia for wanting to kill Jabba – not only has he licked her face and forced her into an uncomfortable metal bikini, but she has also been forced to lay seductively next to his throne all day – totally bad for her posture.

The end result of this scene is that Leia is associated with the sexual fantasies of a generation and a metal bikini becomes an icon. Jabba on the other hand becomes associated with gluttony, debauchery and over indulgence.

However, Jabba was over 600 years old so the lifestyle of Jabba we see in Return of the Jedi only covers a very small part of his life. If we delve a little deeper we see that Jabba’s mental stability was unraveling in his final years. This in turn lead to an eating obsession and it was this obsession that would ultimately kill Jabba.

Lesson 1: Assassination is not a good way to end a relationship

Here is a picture of Jabba only 36 years prior to events of Return of the Jedi at the largest pod race in the galaxy, the Boonta Eve Classic. Note that he is carrying a lot less weight and is not reliant on a gigantic repulsor sled to carry him about. 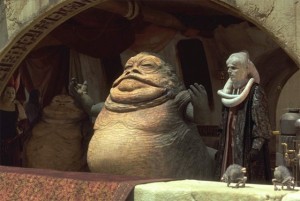 Also notice the other Hutt to the left of the picture. Sometimes mistaken for a “Mrs Jabba”, this is actually Gardulla the Hutt, a sometimes rival and sometimes date at the races of Jabba. The two of them hadthe ultimate on-again, off-again relationship, one day they might be dividing up the smuggling and slave trades, the next day their goons are killing each other in the streets.

TV has taught us that all good rivalries have an element of passion and spark that often results in sexual tension. Sometimes this sexual tension is resolved amicably, sometimes it ends in ratings disaster. In the case of Jabba and Gardulla, the sexual tension was ended when Jabba had her assassinated.

Jabba’s initial elation at assassinating and finally ‘winning’ his rivalry with Gardulla was short-lived. His long term rival was gone, as was all the passion that came about from that relationship. Subsequently, Jabba would spend the rest of his life trying to recapture that rivalry in other relationships of his, all of which were bound to fail.

So the lesson here is, try not end a relationship by being an ass. You might feel a temporary elation of superiority and dominance, but eventually it is you that will suffer in the long run.

Lesson 2: You can’t resolve issues with people by freezing them in carbonite

Jabba had a little Huttlet of his own called Rotta (whom he nicknamed Punky Muffin). It’s not entirely clear if Gardulla was Rotta’s other parent (no one is entirely sure how many Hutt’s you need to make a Huttlet in the first place), however it is clear that Jabba was quite affectionate towards him/her/it. 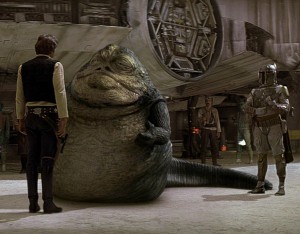 Rotta would be kidnapped by Jabba’s own uncle at one point, but after being successfully rescued we don’t really hear about him again really – presumably being the offspring of a crime lord is bad for one’s health. In any case, Jabba is at least capable of paternalistic instincts from time to time, and would eventually have a similar relationship with a promising smuggler called Han Solo.

In the later version of A New Hope we see Jabba having a business meeting with Han. Notice that Jabba is a lot slimmer than he will be 4 years later in Return of the Jedi, and he doesn’t need a repulsor sled to move around. The other thing to notice is that the tone of this conversation is not particularly aggressive. Han even stands on Jabba’s tail at one point, yet Jabba effectively shrugs it off – that’s like walking up to a loan shark you owe money too and slapping them in the face.

This interaction is really more like Jabba playing the role of father to a mischievous son in the shape of Han. Granted, there are not many fathers who would send a bounty hunter after their children to collect a smuggling debt. But Jabba sent Greedo, arguably the worst shot in the galaxy. Everyone (except Greedo) knew that Han would kick Greedo’s ass in a fight – and shoot first.

Jabba’s attitude to Han hardened significantly after Han left his employ and joined the Rebel Alliance however. Feeling the loss once again of another person he was close to, Jabba’s response shows of a growing fear of abandonment. Jabba doesn’t have Han executed like he did with Gardulla, he just has him frozen in carbonite and put on display in his throne room to look upon each and every day.The problem with freezing someone in carbonite is that it’s only a matter of time before their friends break into your house, kill half your employees, and then blow up your sail barge with you on it.

So the lesson here is, if you fear being abandoned, forcing or coercing them into spending time with you is just not going to work. Eventually they will escape, or you will be sent to jail for Deprivation of Liberty.

Lesson 3: You don’t make friends by chaining people to your repulsor sled

Jabba has always liked to surround himself with attractive slave girls. However it is only in the last period of his life that he actually starts chaining them to him. Like freezing Han in carbonite, this is really just Jabba acting out his fear of abandonment in really unproductive ways. Freezing Han in carbonite meant he had a lot of control over that relationship, unfortunately it also severely hampered his ability at social interaction. 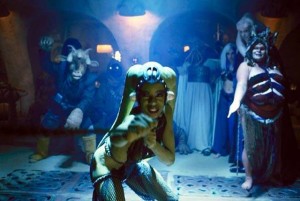 So instead of freezing everyone in carbonite, Jabba just started chaining slave girls to his repulsor sled instead. They still couldn’t escape, but at least they could still dance and engage in casual conversation from time to time.

Oola the dancing slave girl is an example of this in practice. Even after being chained to Jabba’s repulsor sled, Oola is still engages in a last act of defiance. In response, Jabba has her fed to his Rancor monster. However now he has to fill the role of chained up slave girl all over again since no one would want to volunteer for the role since Jabba isn’t that nice to really hang around with.

So this lesson is pretty straight forward – if you have to force people to spend time with you, either through emotional manipulation, coercion, or with chains around their neck, then you’re probably not that popular. In fact, you might be a complete ass to hang around. The good news is that being an ass is completely within your control to change.

Here are some tips to make friends without using chains:

If you stop doing the above then people might like to hang out with you and you won’t need to chain them up.

Jabba’s weight didn’t change much for 600 years. However, the last four years of Jabba’s life saw a rapid weight gain, corresponding with his increasingly troubled emotional state. Jabba addressed his fear of abandonment by trying to control everyone around him, either by killing them, freezing them in carbonite, or chaining them to his repulsor sled. None of these attempts worked very well so he eventually turns to something he actually does have control over, food. Food however is not a very good replacement for people. Particularly if you try to eat those people instead – that’s just called cannibalism. 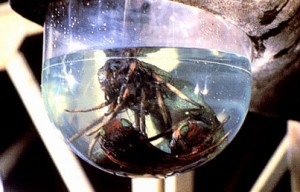 Jabba is really just an emotional eater, however emotional eating is very unsatisfying in the long run for everyone, including the most powerful crime lord in the galaxy. After all, if emotional eating worked, then people wouldn’t need to keep doing it all the time.

By Return of the Jedi, Jabba is having 9 meals a day. He’s also got an endless supply of paddy frogs to snack on within reach. Since he’s now so obese he can’t move on his own accord, he also can’t get up and walk away from these unhealthy snacks either.

Jabba’s methods of conflict resolution also now resolve around ‘eating’ his problems. As soon as anyone particularly feisty disagrees with him, he attempts to resolve the conflict by outsourcing the problem to the Rancor monster, who does the eating for him. Unfortunately, a Rancor monster is not a substitute for a good therapist.

So the lesson here is – emotional eating won’t make your problems away, it will just make them worse. If you are engaging in emotional eating and want to change your behaviour but don’t know how to do it effectively, then don’t consult a Rancor monster. Instead, go talk to a qualified therapist, nutritionist and/or personal trainer who will give you the tools to get over your food addiction.

Han, Luke and Leia all attempted in their own way to help Jabba get over his issues.

Han: Even I get boarded sometimes. Do you think I had a choice?

Firstly, Han tried to get Jabba to relax and not be such a control freak by trying to get him to understand that sometimes smuggling operations don’t pan out.

Luke: Jabba, this is your last chance. Free us or die.

Secondly, Luke tried to warn Jabba that his lifestyle was going to kill him. His salvation could come if he gave up his obsession with controlling everyone around him. When that didn’t work, Luke tried to sever Jabba’s unhealthy relationship with food by killing his Rancor so he couldn’t use it to avoid resolving his conflicts.

Leia: We have powerful friends. You’re going to regret this.

Finally, when Jabba upgrades the death by eating threat from Rancor monster to Sarlacc, Leia tries to stop Jabba’s obsession with food by cutting his ability to swallow. She is ultimately successful, but unfortunately for Jabba, a side effect is that it also results in cutting his ability to breathe as well.