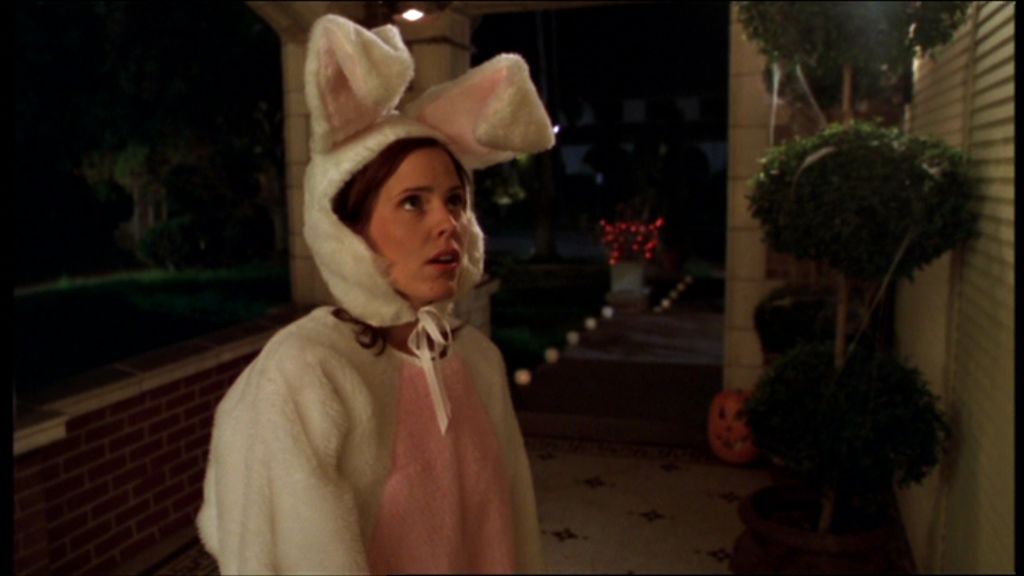 Anyone who knows of Buffy the Vampire Slayer should also know that Anya, the 1000-year-old-former demon-turned-mortal-turned-demon-turned-girlfriend/wife of Xander was also not a big fan of rabbits, particularly in bunny-form.

While some have dismissed Anya as simply having a bad case of leporiphobia, I have more respect for the elderly and consider anyone with over a thousand years’ worth of life experience as having some valuable and insightful things to say about the dangerous world we live in.

“Bunnies. Bunnies. It must be bunnies!”

Lesson 1: Anya Didn’t Live Past 1000 Years on a Diet of Milk Chocolate

You may have heard that chocolate is good for you. Mostly this is attributed to the high amount of flavonoids and antioxidants contained in the cocoa that chocolate is made from. Before you start having chocolate Easter eggs for breakfast all year round, just remember that all of these studies relate to the beneficial effects of the cocoa used to make the chocolate, which is not necessarily the same as the chocolate Easter eggs you inhaled Sunday morning.

Cocoa is actually quite bitter, so to make it more appealing, most of the chocolate we actually eat has had varying degrees of sugar and fat added to it. Some chocolates are so processed that they even remove much of the cocoa and its corresponding health benefits from the final product. So essentially means you are eating bricks of lard covered in sugar (well ok, it’s not exactly like eating a brick of lard covered in sugar, the chocolate probably has more artificial flavours in it than lard).

Milk chocolate – the kind in Easter eggs or sold in blocks

Dark chocolate – the ‘exotic’ stuff that hardly anyone buys

Unfortunately, this is one of those cases where the nicer it tastes, the worse it is for you. If you really want to eat healthy chocolate, go for the most bitter, crumbly stuff you can find – though it probably won’t taste like any chocolate you have eaten before.

So if the Easter Bunny were to hand out eggs made of raw chocolate we could argue his intentions were good. Instead, he hands out little brightly coloured packages of diabetes and heart disease – doesn’t seem like such a benign character now aye?

Lesson 2: Anya Knows the Easter Bunny is a Demon

Of all the Christian holidays, Easter is the one with the most tenuous connection between the religious significance of the day and how it is celebrated in practice.

It starts off ok – Good Friday kinda makes sense since it is a commemoration of the suffering Jesus went through on a really bad day – namely the day where he was tortured and then crucified. Traditionally this was commemorated by fasting and doing without luxury meats. Fish didn’t count as a luxury meat back in the olden days so to eat it was considered giving up on the good life for a bit. In the modern context, we continue to commemorate the suffering of Jesus by deliberately creating a range of First World Problems for ourselves instead – all the shops are closed, seafood is really expensive, and all the fish and chip shops are really crowded.

Compare that with how Easter Sunday is celebrated a few days later – the resurrection of Jesus is commemorated by having a giant rabbit hand out chocolate eggs. You can also get chocolate rabbits, chocolate wombats, chocolate bilbies and maybe chocolate frogs – with the exception of the frog, none of these animals actually lays eggs – but the chocolate eggs look like chicken eggs. You might get the occasional association with a chick, even though really you would really need a fully grown chicken to actually lay an egg, though it wouldn’t be chocolate. In any case, I don’t think it’s entirely appropriate for a chick to be offering up its unborn brothers and sisters for sacrifice.

Personally, I think it would make more sense to have a tradition of Easter Sunday that was more like Halloween instead since the crucifixion is much more like a slasher/horror/fantasy flick: a do-gooder is betrayed by his friends, tortured, nailed to a cross, and then left to die a slow and painful death. A Roman soldier takes pity on him and stabs him in the side with a spear that then becomes known as the Spear of Destiny – henceforth whoever wields it can rule the world for good or evil. Jesus then briefly comes back to life as a zombie, then disappears for all eternity (until the end of the world) but in the meantime is referred to as a ghost (as part of the Holy Trinity that consists of the Son, the Father and the Heavenly Ghost).

No one actually knows how a death-dealing giant rabbit with an interest in children came to be associated with Easter, though the assumption is that it is another Pagan notion hijacked by Christians along with Santa Claus and a vision of Satan with horns. However, if there is one thing that Buffy the Vampire Slayer has taught us, always be suspicious of anything that just suddenly appears: whether it be the sudden appearance of a sister; spontaneous singing; or sudden personality changes from the guy you just hooked up with.

So there is a sudden appearance of a giant rabbit, and no one knows where he came yet no one seems to bothered by it? Sounds like a demon to me! The association with Easter is just an opportunistic move by the Easter Bunny Demon to sneak us his little packages of brightly coloured chocolate death under the guise of a holiday to mark the crucifixion of Jesus.

As a former demon, Anya would know the full story of Easter – it takes a (former) demon to know a demon after all. Plus she’s old enough to know what life was like pre-Easter Bunny Demon. If you still have any doubts that the Easter Bunny is a demon, try and find a picture of someone in an Easter Bunny outfit that doesn’t look evil or creepy.

Lesson 3: Anya Knows that Bunnies Can Kill You

Rabbits can carry an infectious disease called Tularemia, also known as ‘Rabbit Fever’ – it’s like ‘Beiber Fever’ only you can treat it with antibiotics. 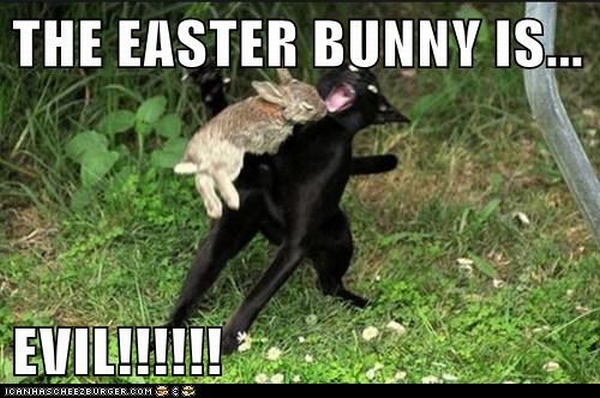 Tularemia is a bacterial infection in which the most common mode of transmission is through a few species of ticks that also just happen to live on rabbits, rodents or hares. If you get bitten by one of these ticks you are likely to know about it within 3-5 days, when you’ll start to get symptoms such as fever, lethargy, anorexia, signs of septicaemia and the most inconvenient symptom of all, death.

Due to the wonders of antibiotics, the fatality rate of Tularemia if treated is less than 1%. For those who underestimate the power of bunny-bacteria and don’t get treated, about 5% of cases of Tularemia result in death.

So not only does Anya know that the Easter Bunny is a demon, it’s a demon that also has fur that is infested with parasites that can kill you and therefore prolonged contact is not advised.

How to Protect Yourself from Bunnies

So there you have it – the Easter Bunny is a demon who has hijacked a Christmas holiday and is trying to kill us all by encouraging the excessive consumption of the unhealthy version of chocolate. Given that Easter is over for this year you might be thinking that it’s too late to do anything about the Easter Bunny Demon’s nefarious schemes, but you’d be wrong – you can start preparing for next year’s battle for the fate of humanity right now!

Stop being such a chocolate snob!

If you are in the ‘chocoholic’ camp but only eat milk chocolate and have never even bothered trying any of the other non-milk-chocolate varieties then quite frankly you don’t really love chocolate, you just like the milk and sugar that’s added to it. Most people just discount these other chocolates because they taste different, but I say, stop being such a snob and at least give them a go – you might actually find you like them.

Trying the non-milk chocolates also means you can engage in a bit of product substitution – no one is saying you have to replace all your Easter eggs with celery sticks next year, but use the next 12 months to find some non-milk chocolate alternatives to supplement next year’s binge.

Stay away from all rabbits

Rabbits are Australia’s most agriculturally and environmentally destructive introduced species, costing between $600 million and $1 billion to control annually which is money that could alternatively go on other far more cooler things if there were no rabbits. Rabbits have killed off a range of native species like the bilby. All the diseases we have introduced to keep their numbers in control mean that if you want to keep one as a pet you have to get them extensively vaccinated, or they will just up and die on you anyway. They don’t respond to voice commands, nor can they be trained to herd sheep. They are illegal to keep in as pets in the state of Queensland and you can be fined $30,000 for having one.