How to prevent migraines – new drugs, psychic powers or botox? 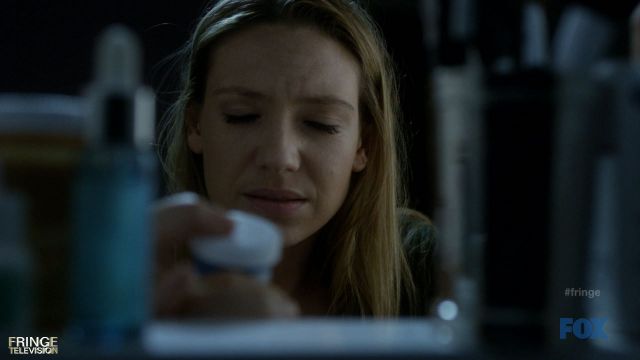 Two new drugs show promise for preventing migraines, Olivia Dunham demonstrates migraines aren’t such a bad thing if combined with psychic powers, while Botox gets a bit cheaper as an alternative treatment – though it may give you droopy eyes.

If you have an aversion to needles and injections, then you should watch Fringe for a bit of exposure therapy since someone is injecting someone with something in just about every episode.

For example, we see Agent Olivia Dunham suffering from regular migraines for a number of episodes. The cause? Bad guys seeking to collapse two universes on each other of course! Turns out they had been covertly breaking into her place at night, gassing her unconscious, then injecting her with Cortexiphan to boost her psychic abilities and alternate-universe-jumping powers, then wiping her memory afterwards.

I already get the occasional migraine and they are pretty annoying time wasters. So call me crazy (or psychic) but I’d be pretty happy with migraines as a side effect of being able to cross between universes, set things on fire remotely, create electrical discharges, move cars and objects around and kill people with my brain. But maybe that’s just me.

In any case, what Olivia Dunham and migraine sufferers have to look forward to in common are the injections.

Something new to shoot up with

The American Academy of Neurology recently announced the results of two early studies that involve drugs that are designed to prevent migraines from occurring, rather than stopping them once they have started. Both drugs are directly targeted at calcitonin gene-related peptides (CGRP), which is a relatively new suspect in the world of migraines – elevated levels of CGRP seem to be associated with the onset of migraines.

…and the placebo group…?

Well here is where the placebo effect rears its ugly head as it often does in studies of migraines and headaches.

That’s right – just going through the process of having an injection with no active ingredient in it was almost as effective in treating migraines as the fancy drugs, but both the drug and the placebos has a massive positive impact on the number of migraines the participants suffered during the trial.

This is because placebos and migraines/headaches have had a long and intimate relationship.

(I could make an analogy between Placebo the band having a long and intimate relationship with mind altering drugs but I won’t because that would be cheap.)

It’s notoriously hard to do a migraine trial without having a big placebo effect. In fact, a lot of insights of the placebo effect actually came about as a spin-off from trials to treat migraines and headaches in the first place.

Ok so really we don’t entirely know how the placebo effect works and/or if we can harness it. It would be so much easier to just invent Cortexiphan like in Fringe – then we can travel to the alternate universe where technology is slightly more advanced and they know more about the placebo effect and just ask our alternate selves how to prevent migraines. Plus they have airships in the alternate universe. Airships are cool.

In the meantime, there’s Botox… or not.

Meanwhile, the other injection that is all the rage, Botox, has now been added to the Australian Pharmaceutical Benefits Scheme to make it more affordable for migraine sufferers (it was already listed on the British National Health Service in 2012).

Those new drug trials target the CGRP that (may) cause migraines, whereas Botox goes for a more superficial and shallow approach of someone going through a midlife crisis by targeting the muscle tightening in the face and neck that can be the trigger for most headaches and many migraines instead.

The thing that really started it off was the PREEMPT trials that involved injecting Botox into seven specific areas of the head and neck of participants every 12 weeks for 56 weeks. After six months and two rounds of injections, those treated with Botox had an average of 8 less migraine days per month. After 12 months, 70% of those treated had approximately less than half as many migraines as they did prior to the trial.

Effectively the result was that a few Botox injections appeared to reduce migraines in participants, while only 3.5% of participants receiving the Botox withdrew due to adverse reactions – and only 3.3% had droopy eye! That’s good right…?

Before you go looking for cheap PBS Botox to get rid of some wrinkles after feigning a bit of a sore head, you have to jump through a few hoops first. For starters, you have had migraines for a least 15 days per month, and, have unsuccessfully tried at least three other preventative medications first. Oh and it’s prescription only of course too – so if you want to rort the system you’ll need to get your GP on side, at which point you might as well just go pay some cosmetic surgeon to do it anyway.

Before you go try Botox for ANY reason, you might want to look into the other side effects first…