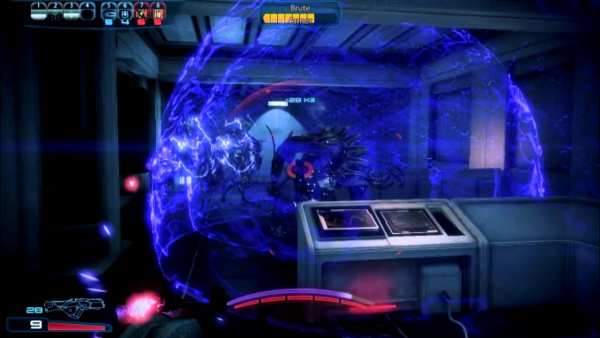 Geek Speak is where we delve into explanations of the sometimes obscure terminology used at Healthy Geek.

Meaning: An exclamation used to motivate oneself prior to a physical and/or mental challenge, or to indicate that one is currently experiencing short-term muscle fatigue during an exercise that is of a beneficial nature. The Bubble of Pain can be seen as both a defensive and offensive statement since it provides aid to you and your allies, while undermining the activities of your enemies. In this context, an “enemy” can be an opposing player/NPC in a game, or a more metaphorical enemy such as “lethargy” or “failure”.

Use: Largely consists of yelling “Bubbles of Pain!” repeatedly.

In real life situations it can be used as a rallying cry prior or during an activity. If playing Mass Effect 3 Multiplayer it can be used after using the Biotic Sphere power in an offensive maneuver against a slow-moving opponent such as a Brute, Atlas or Scion. It can be used descriptively after the fact e.g. “I was casting bubbles of pain all over the place!”, or used to describe a previous physical or mental challenge faced e.g. “he was being such a wanker, it really cast a Bubble of Pain on the whole room”.

Repeatedly saying “Bubbles of Pain!” in real life situations can also indicate to other players that you wish to play Mass Effect 3 Multiplayer.

Etymology: Bubbles of Pain was originally in reference to the use of the Biotic Sphere power in Mass Effect 3 Multiplayer by Healthy Geek associated players.

The Biotic Sphere power is usually seen as a defensive power since it creates a protective sphere around a fixed point that provides a defensive bonus to you and your team members who stand inside it. However, at higher skill levels, enemies that enter the sphere area also take damage and have a Warp effect applied to them, thereby setting up those targets up for combination attacks for the rest of your team.

The Lannisters should have sent their gratitude