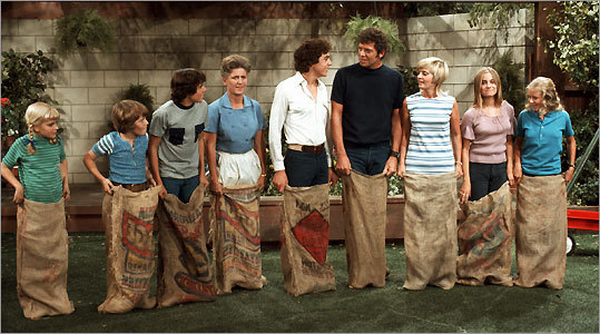 This is part ten of Looking for Resolutions in all the Right Places, in which we look at the top 10 most commonly chosen New Year’s resolutions and see if they are all that and a bag of potato chips (so to speak).

The ideal vision of this resolution is the Brady Bunch Hawaii special – there might be some culturally insensitive shenanigans with a tiki idol, but generally everyone gets along by the end and there are smiles all round for the closing credits and maybe time for a potato sack race.

At the complete opposite end of the spectrum is the Griswold family vacation in which Dinky the dog is dragged to his death, Aunt Edna dies and her body is dumped at her son’s home, Clark Griswold nearly commits adultery in a hotel swimming pool downstairs from Ellen Griswold and then they all end up taking hostages at a theme park.

Oh spare me, Clark, I know your brand of family fun. Tomorrow you’ll probably kill the desk clerk, hold up a McDonalds, and drives us 1000 miles out of the way to see the world’s largest pile of mud!

Most holidays that are attempts to spend more quality time with the family end up somewhere between the Bradys and the Griswolds – unless you are a member of the Stark family, in which case your nice trip to the Gold Coast just results in everyone getting separated and then having their heads chopped off.

The problem with this New Year’s resolution (like many others) is a bit technicalities and a bit semantics.

This particular resolution only says you will spend more time with family, it doesn’t say you or your family are actually going to enjoy this extra time you spend with them. Perhaps this is why this resolution can lead to so many traumatic family holidays – if you want to spend more time with family, just take them on a trip far enough from home so they can’t easily go home, then confine them in a small space so they can’t avoid each other. It’s a bit like chaining someone to your repulsor sled, only instead of just one slave girl, you are also chaining their parents, their kids and everyone else.

The motivation behind this resolution is generally social, or the lack thereof. Since the members of a nuclear family spend most of the year isolated from each other, a “social debt” is accumulated throughout the year whereby the participants accumulate a debt of social time they feel they should have spent with each other, but didn’t. Come New Year’s resolutions time and with the weight of all that social debt weighing them down, people approach the problem like financial debt – they try and get rid of it as quickly as possible with a big silver bullet solution.

If you’re in financial debt, the worst thing you can probably do is go gamble your savings on the roulette wheel in the hope of striking it lucky, winning enough to pay your debts and move on to a perfect life. The social debt equivalent of gambling is the family holiday – the parents in particularly will have staked all their hopes of social debt payments on a single holiday, even though the odds are really stacked against them in pulling it off successfully. Even if the bookings, travel arrangements and planned entertainment goes off without a hitch and no one digs up a tiki idol that gives you all bad luck, there’s no guarantee that any of that will result in the family coming together and having a good time with each other.

You can’t blame the parents of nuclear families in this situation though since two parents raising a few kids on their own while also working to provide an income is not normal – or at least it hasn’t been for much of human history. No, it’s not that mum should be at home looking after the kids either, that’s also not normal.

For most of human history, the family used to be like this:

Both parents worked since the period when people are biological fertile and able to produce children also coincides with the period when they are most physically able to either engage work. Original job titles such as “hunter gatherer” was all that was going, but then parents could choose work in the fields, or just become a “looter and pillager” to earn some extra money on the side to pay the bills. Either way, mum and dad both worked. This left child rearing to a wider family group that included grandparents, siblings, uncles, aunties, neighbours, family friends and the rest of the clan/village/tribe. In fact, raising kids was a bit of a quid pro quo between the generations – mums and dads were the bread winners who fed everyone, the oldies who were too frail to work the fields contributed by raising the kids that the parents were too busy to raise themselves. Also had the nice side effect of reducing the formation of generation gaps.

Raising kids was something that the whole community shared in back in the olden days – the family group was larger, multi-generational, diverse, flexible and you didn’t necessarily have to be genetically related.

Then along comes the Industrial Revolution which not only inspires the Steampunk aesthetic, but also result in a change to the nature of work. Change the nature of work and you change the nature of the family. The family becomes smaller, men become the primary bread winner, women become the primary parent, we all increasingly retreat from our local communities and engage more with people at work rather than our neighbors. We increasingly rely on the state to help raise our kids, which means we lock them up in schools run like prisons. Instead of looking after our oldies in return for them looking after the kids, we lock them up in nursing homes run like prisons. In fact these days our answer to everything is to lock someone up in an institution run like a prison. Or just a prison.

Just as the nature of work changed with the Industrial Revolution, so the nature of work is again changing due to technology – which make some people upset. The next time those hard core fundy Christian Corbenardi’s bemoan the destruction of the “traditional” family due to gays, lesbians, terrorists, socialism, technology, aliens and bad thoughts, what they are really upset about is the destruction of the “recently traditional post Industrial Revolution family” – sometimes just called the nuclear family. Since gays, lesbians, terrorists, socialism, technology, aliens and bad thoughts all existed before the Industrial Revolution, this criticism is a little unfair. If anything, the “non-traditional family” is more “traditional” than the “traditional nuclear family” since it is more flexible and diverse. The term “nuclear family” wasn’t even used till the mid 20th century – probably because they had to invent the word “nuclear” first, which required all that physics stuff like “nuclear fission” and the “nuclear bomb” etc.

Although the definition of family is drifting towards its more flexible past again, when most people talk “family” they are really thinking of the kind with two biological parents and some kids. If you want to spend more time with a “family” that is so narrowly defined, then you are really limiting your options.

Step 1: Redefine the “family” that you will spend time with

Unlike the Bernardi Fan Club, this is not about being a right royal pain in the ass and imposing your version of a family on everyone else while being obsessed with gays and lesbians, the sex life of fluffy animals, and public broadcasters daring to use the world wide internets rather than radio.

The idea is that you redefine family. If your definition family is broader and more flexible, you have more options in who you will be spending more time with.

So the next time you think of your best mate as being “like a brother” or you refer to them as your “sista” even though you aren’t biologically related – well then there’s nothing wrong with admitting them to your definition of your family. If there were other people involved in your upbringing that were “like a father/mother” to you, then there’s nothing wrong with including them in your definition of your family either.

If you were raised by the TV however, you might want to find a real life person for a parental figure since there is nothing much on free to air worth watching anymore anyway – and what is worth watching is just going to be played out of sequence and years after it is released online anyway. Basically TV has become an absentee parent.

If you want to spend more time with your newly defined family, don’t put all your hopes and expectations in one unrealistic basket in the form of a holiday or elaborate party. That’s a lot of expectation to put into one event that could very easily end up with people dead and/or in jail if things go horribly wrong. If you are stressing out over organising an event, making travel arrangements, bookings and planning an itinerary, you’re not spending quality time with anyone.

Happiness comes from realistic expectations, so forget the Brady Bunch trip to Hawaii and just set your sights a little lower into the territory of shits and giggles.

For example, why travel across the country seeing visiting tourist traps when you can gather everyone up in the car and tour the local area stealing street signs that match the names of everyone in the car? All you need is Google maps, and a car and you have a family bonding experience – and you even get mementos out of it! If you live in Brisbane and the thought of theft is uncomfortable, fear not for the people of Brisbane have been stealing each other’s street signs for years to the point where you can even buy them off the Brisbane City Council directly. 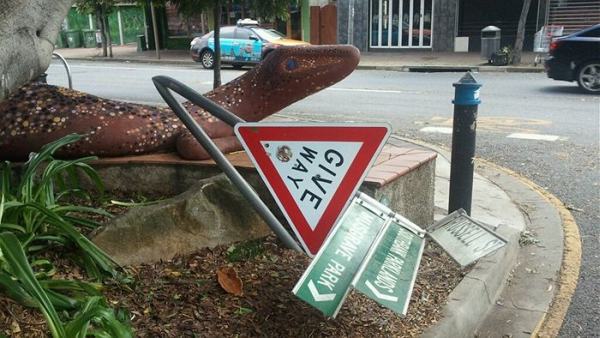 Socialising is a little like exercise: a year’s worth of crap can’t be compensated with one intense cardio session. In fact, it will probably just make you sick.

If you are finding it really draining to be around your family for one intense period of endless contact hours, then they are probably sick of seeing your face as well and are just more polite than you are. You wouldn’t create an elaborate way to monopolise the free time of your friends, so why do it to your family? Spread the time you spend with your family into smaller manageable bits throughout the year rather than trying to dump all your attentions on them one go.

This will allow you to spend more time with family but do it in a more sustainable/normal kinda way rather than in a intensely obsessive kinda way. Rather than accumulate the feelings of guilt associated with social debt at the end of the year and then try to pay it all off in one crazy holiday, spending shorter, but more frequent time with family throughout the year and you won’t accumulate social debt in the first place to feel guilty about.

Should “spend time with family” be on your next set of New Year’s resolutions? No – if you want to build stronger social relationships with your family, engage in random, largely unplanned, moments of shits and giggles instead.