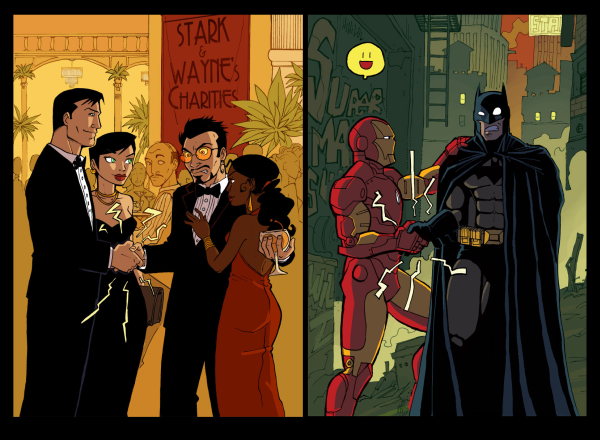 Being rich is a goal sought after by many, but achieved by so very few. Mostly we want to be rich because we are thinking about the level of freedom we want to have – freedom to quit a job you don’t like, freedom to go on a holiday whenever you feel like to wherever you feel like, freedom to possesses all those trinkets you always wanted. However, does being rich actually give you more or less freedom to do what you want to, or does it make you even more screwed up than the rest of us?

Comics are full of rich people doing all kinds of really cool things we would all like to do, the two prime examples being Batman and his alter ego, Bruce Wayne, and Tony Stark, and his alter ego, Iron Man. But did riches bring happiness to either of them? Or did it just set them up for a life of misery?

Bruce Wayne was born into his wealth, and as an only child he never had any sibling rivalry to compete with in terms of inheriting his parent’s fortunes – and being an orphan, he certainly inherited those fortunes at a young age. So going by the rich = happy formula, Bruce Wayne should have been happy from an early age right?

Bruce’s coping mechanism to deal with the death of his parents is to increasingly become detached from society, while also creating an alternate persona in the form of “Batman”. Whereas the personality of Bruce Wayne would develop into a spoilt little rich kid womaniser with an inability to build lasting relationships, Batman is a far more socially isolated and broody persona, dedicated to taking the law into his own hands to seek vengeance against all criminals. The Batman persona even includes a bit of dress-up, a penchant for deliberately trying to scare the crap out of people (striking fear into the hearts of criminals), or if the latest movies are included, an interest in speaking with a funny voice when in costume.

Children the world over suffer from trauma – kids unlucky enough to be born into conflict zones and/or low socio-economic circumstances are also more likely to witness the death of their parents in front of them. This hasn’t resulted in an army of caped crusaders running around however. When faced with such trauma, some kids deal with it by necessity, others seek professional help, others become criminals or socially maladjusted in general. In the case of Bruce Wayne however, having access to wealth just ensured he just had the freedom to live out his fantasies of his Batman alter-personality rather than actually deal with his problems.

Ironically enough, some of those criminals he sought to strike fear on the hearts of probably had their own traumatic childhoods they were attempting to deal with. All Batman did was beat the crap out of them and have them locked up in prison and/or the very badly run Arkham Asylum.

Tony Stark is one of those guys who we should probably dislike – his wealth is based on selling weapons, he lives a life of luxury and isn’t exactly a philanthropist, he’s a playboy self-aggrandising womaniser. Yet at the same time he’s still a popular super-rich superhero. I think part of the reason why Tony Stark is likable is that his is the story of the science geek who is popular AND has the funding to do whatever science project he wants.

Plus he’s got a really cool suit that allows him to fly around shooting things with repulsor rays – he can even fly into space if he feels like it.

On the surface, Tony Stark seems to have all the strengths and none of the weaknesses of ordinary people. He’s super smart like Nikola Tesla, but with the ruthless business acumen of Thomas Edison. He’s got the riches of Bill Gates, but the positive media profile of Richard Branson.  And unlike the split personality of Batman/Bruce Wayne, he has a perfectly well adjusted sense of self when it comes to his identity as Iron Man/Tony Stark. So why then did he become an alcoholic? 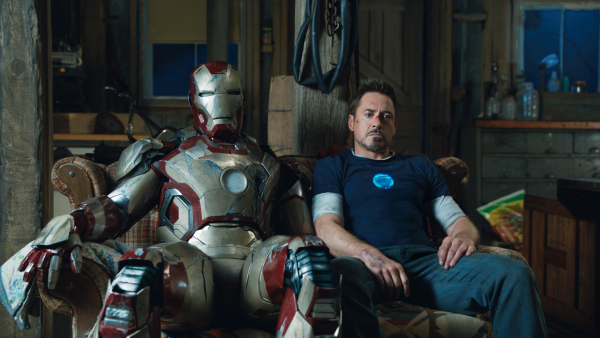 As children we are born narcissists – we are selfish and self-centered and this is perfectly normal. Childhood and adolescence is where (most of us) progressively map out our place in the world as we move from a state of having someone else do everything for us as a baby, to becoming a mature adult where we do things for ourselves. We face obstacles, overcome some, and accept the failures.

The problem for Tony Stark is that his obstacles were too few and far between. He was so smart he never had study and could effectively do any job he ever wanted. He was never a social outcast or one of the unpopular kids. He never had to worry about money and always had whatever he wanted – he certainly never had to put up with working a 9-5 job he hated just to pay the bills. Effectively he has been spoilt by life, and has missed out on the learning opportunities that come from adversity.

The end result is that Tony Stark probably has narcissistic personality disorder. He’s totally obsessed with himself and what people think of him. The outward confidence is a facade for a super-stressed out insecure personality who inwardly would always be wondering if people like him for who he is or for what he can do for them. Hence comes the struggle with alcohol – in the absence of the normal obstacles placed upon us mere mortals, Tony Stark effectively just created one of his own making.

If you removed money from the equation Tony Stark would have had the chance to become a super intelligent, but still potentially well-adjusted individual.  Sure, there would be no Iron Man, but a super intelligent scientist Tony Stark with a sense of humour struggling to get grant funding and pay the bills would be… well normal.

So there it is – money might buy you a Bat Cave or a power suit that allows you to fly into space, but it won’t buy you happiness. But Batman and Iron Man aren’t the only wealthy industrialists with problems, so here is a quick run-down:

I should point out that since there are very few rich female characters in fiction, most of them are emotionally well adjusted. While the men run around being all emotionally scarred, the sisters are doing if for themselves.

New Year’s Resolutions: 7 ways to enjoy life to the fullest