2 mins read September – A geek’s got get ready: It is green
2 mins read

September – A geek’s got get ready: It is green 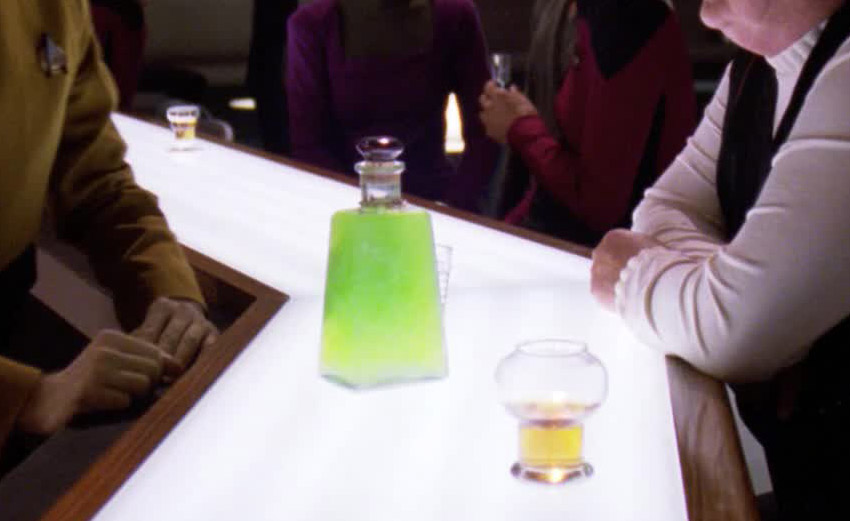 Aldebaran Whiskey - It is green

September is dedicated to Things That Are Green and Suspended Animation.

An android walks into a bar with a Scottish engineer and places a bottle of Aldebaran Whiskey on the table. The engineer says “what is it?” to which the android replies, “It is green”.

Clearly it doesn’t take much to get Scotty started since he takes one shot of the stuff and then shows up on the holodeck to get a little abusive with the computer and reminisce about the good ol days with Captain Picard. In Scotty’s defence, he did just spend the past 75 years in suspended animation dematerialised in the buffer of a transporter, so he’s bound to be a little grumpy. However, after having a little bit of a sooky la la on the holodeck he does go on to save the day (and the Enterprise) using some old school engineering tricks. He is then is given a shuttlecraft “on extended loan” for his troubles. Since he was originally on his way to his retirement home, this is the Star Trek equivalent of being given a camper van and becoming a Grey Nomad.

The moral of the story is that sometimes you have to take a break by going into suspended animation, drink something green (if not a few shots of Aldebaran Whiskey), reminisce about the past a bit and save the Enterprise before someone will give you a spaceship to wander around the galaxy in.

While it hasn’t been 75 years, I have taken a leave of absence from Healthy Geek for the past two months during which I engaged in the poor man’s version of suspended animation (I slept more), I did drink some green tea, talked about the past with some people I went to university with. While I didn’t exactly save the Enterprise and get given a shuttlecraft, I did get a new job and then rewarded myself buy buying a more ergonomically appropriate desk to write Healthy Geek articles from.

Aldebaran Whiskey Data Green Tea Grey Nomad I was promised a spaceship but all I got was a damn iPhone Montgomery Scott September Star Trek Star Trek: The Next Generation Suspended Animation Taking a Break Things That Are Green USS Enterprise