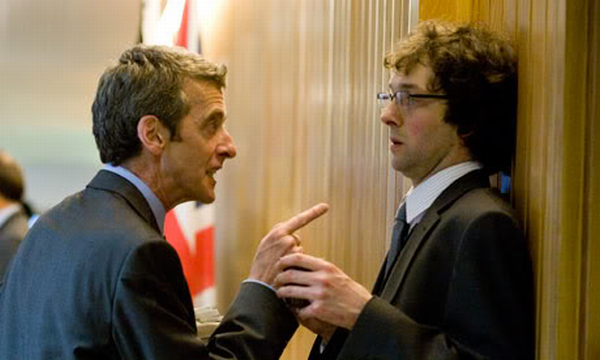 The Thick of It - BBC

The New Doctor Who

The BBC has announced with much fanfare that the 12th incarnation of Doctor Who is to be played by Peter Capaldi, who was previously best known as the foul-mouthed spin doctor, Malcolm Tucker from The Thick of It.

It will be interesting to see if Peter Capaldi can keep quarantine his previous incarnation as a spin doctor from his new role as The Doctor, though I think it would make the show really head into really interesting territory to have the 12th Doctor be an absolute bastard, and we follow the trials and tribulations of his long-suffering Companions as they try to deal with his constant abuse. He could be the first evil Doctor who gathers Companions through threats of violence and the destruction of all that they hold dear…

If there’s one thing that The Doctor should know by now about humans by now is that our feelings of anxiety are contagious. This can be a problem during stressful situations such as saving the Earth from Dalek and/or Cybermen invasions as all it takes is a few people to freak out and all of a sudden we are all flocking like mad all over the place.

The good news is that while while anxiety might be contagious, so is calmness. So if you find yourself in the midst of an alien invasion initiated by the new Evil Doctor because he was too busy berating his Companions, you can assist your fellow humans to retain their cool by being calm yourself. It doesn’t matter if you are faking it and are completely freaking out on the inside since most people won’t know the difference anyway.

So how do you become a bastion of calm with Cybermen marching down the streets and Daleks unleashing death from above? There is one, ridiculously easy way to immediately reduce your levels of anxiety – throw a bit of cold water in your face. The cold water will trigger the mammalian diving reflex and immediately slow your heart rate.

So if you see anyone else throwing water in their face during a disaster, don’t judge them, join in! You’ll be doing your part to save the planet. Word of caution though, you can’t reduce the anxiety of other people by throwing cold water at them, it doesn’t work that way.

Personally this just makes me want that N7 Deck 4 Aluminium Sports Bottle even more as my “Anti-Anxiety-Water-Splashing-Device” – in the off chance anyone from Bioware is reading this I’m totally up for accepting free stuff. Just saying.

Green Tea is a Gateway Drug to Caffeine Addiction (maybe)