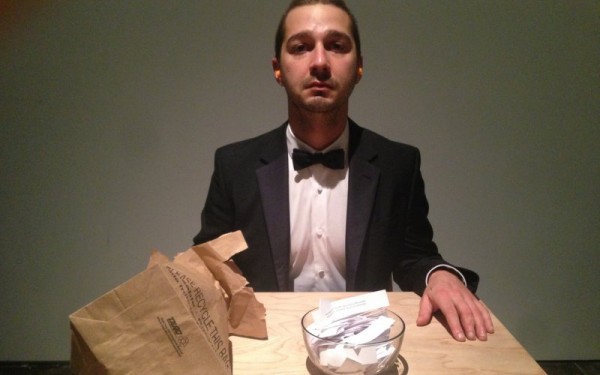 Shia LaBeouf isn’t exactly renowned for his acting range – he essentially plays the same confident, yet over eager, geeky type in every role he takes on. However his latest shenanigans might just prove he is either one of the most underrated actors ever, a little bit disturbed, or just showing regret for being the Scrappy Doo of both the Transformers and Indiana Jones franchises. Or all of the above.

We collectively obsess over our celebrities, their secret lives, the “uncensored” snap shots of them going about their daily lives – we want to know what they are *really* like. The problem with trying to find out the person behind the performer is that actors are good at telling stories, lying, manipulating and generally deceiving us – actors are really just people we pay to knowingly deceive us. We heap praise upon the best deceivers, and mock the ones that are transparent or plain.

The problem with great actors though, is that we can never really be sure their off screen public persona isn’t just another act. It’s why all those gossip magazines are always trying to catch celebrities unawares – we want to see what these people are really like. Even if given the answer though, we never really believe it.

Which leads to Shia LaBeouf – who lately seems to spend all his time with a paper bag on his head saying to Daniel Clowes a lot via twitter and through the much older social media platform of sky writing.

For those who have missed out on the Shia LaBeouf vs Daniel Clowes punch up, it’s all over Shia being accused of plagiarising the work of Clowes, an accusation which in turn snowballed into an increasingly weird debate with lots of abuse on Twitter – because these days, if you’re going to have an argument, it’s not really an argument unless you get thousands of people to hurl abuse at each other on Twitter. Whether intending to be sassy or not, Shia’s twitter apologies were then noted to be similar and/or plagiarised versions of the apologies of other celebrities.

Then Shia walks out of a media conference for his latest movie after quoting a French footballer Eric Cantona in 1995 in response to an avalanche of media criticism after he kicked a fan (footballers really do love to kick things). Then he pops out at the opening of the movie with a paper bag on his head with “I am not famous anymore” written on it.

In the latest addition to what I’m now referring to as the Shia Experience (only in italics), Shia has cast himself as the main attraction (along with his trusty paper bag) in a performance art exhibit called #IAMSORRY.

Essentially, you walk into a little art gallery and are allowed in one at a time. In the first room you get to pick an item from a table that represents Shia’s life such as a whip (Indiana Jones and the Crystal Skull), a transformer toy (Transformers), a book by Daniel Clowes, and a bowl full of paper print outs of the abusive twitters he received during the Twitter implosion that resulted from the Daniel Clowes hooplah. There were also some less obvious items like a wrench, a vase of flowers, a bottle of bourbon and some Hershey’s chocolate kisses and a pink ukulele – presumably I’m not obsessed enough about Shia LaBeouf to know what they refer to…

After taking one of these items you go to another room with a one-on-one audience with Shia with the now infamous paper bag over his head still with “I am not famous anymore” written on it (a phrase he has also been tweeting a lot lately).

Shia says nothing, answers no questions, says nothing – barely even moves really. Some attendees have managed to convince Shia to take the bag off his head, wherein it is revealed that he has been crying underneath the whole time.

If you want to know a more detailed description of what this actually looks like, I suggest you read this article by Andrew Romano who managed to get Shia to take the paper bag off after two attempts and two handshakes. Andrew Romano’s photo taken during his own Shia Experience is also the source of the image used as the pretty picture at the top of this post.

Whereas some commentators are describing this as James-Franco-like-weird, or just a cynical publicity trick, I’m going to give Shia a gold star for effort for all eventualities:

It’s not a bad thing to be compared to James Franco. We need more “weird” celebrities anyway – I’d rather have 10 Shias than another Kevin Costner. I’d rather 100,000 Lady Gagas than be burdened with another Justin Beiber.

If it’s just marketing then it’s a pretty darn creative and effective one given the number of journos to trundle through the #IAMSORRY exhibit for their own Shia Experience. The impression that people seem to be getting from their own personal Shia Experience ranges from bemused, to sympathetic, to maybe a bit unsure of his motivations – but none of it has been negative or hyper critical. If it is just cynical marketing, it’s doing a pretty good job of generating a degree of sympathy, or at the very least redefining his public persona beyond playing a generally disliked character in Transformers and Indiana Jones and the glowing alien skull of doom.

Normally only sociopaths and complete wankers can’t look at someone in emotional distress and NOT have some degree of empathy. If you look at some of the images of Shia from #IAMSORRY you can be left with the impression that underneath the bag is someone who just might actually just be a little bit screwed up, or at least a little distressed. Sad crying Shia does look quite convincingly sad, maybe a little too convincingly so for some observers who suspect there isn’t much acting in it. Already journalists are starting to refer to him as “troubled young actor Shia LaBeouf” as opposed to, “Shia LaBeouf”.

If this is the case then it’s pretty darn good acting. That’s a lot of time he’s spending looking upset for the viewing public which would be pretty draining if it’s all fakery. If it is all fake, then the role Shia has been playing lately as a “troubled young actor Shia LaBeouf” would suggest his acting range is a lot broader than he’s given credit for in the kinds of roles he is cast in.

5. Shia is actually sorry for something

Most people are connecting the “sorry” part of this to the Daniel Clowes plagiarism incident, but he’s also included references to his role in Transformers and the end of the Indiana Jones franchise with glowing space alien crystal skulls. Shia was cast as a Scrappy in both the Transformers series and Indiana Jones and the Crystal Skull. In both franchises the character Shia LaBeouf came to be despised by the fan base because it became iconic of what was wrong with Michael Bay’s treatment of Transformers, and Stephen Spielberg’s ‘betrayal’ of the Indiana Jones franchise by making the Crystal Skull.

If Shia is saying “I’m sorry for being the Jar Jar Binks of Transformers and Indiana Jones” then I’m in favour of that. It’s rare to get someone in film or TV to admit that they got a little carried away and screwd up a film, often just get defensive and sulk about the negative reaction *cough*George Lucas*cough*.

So if this is an act of contrition on Shia’s part it’s something we should support rather than mock. If it’s just an act, on the other hand, then it’s a pretty darn good one and we should admire rather than attempt to recast in the role of “troubled young actor Shia LaBeouf”.