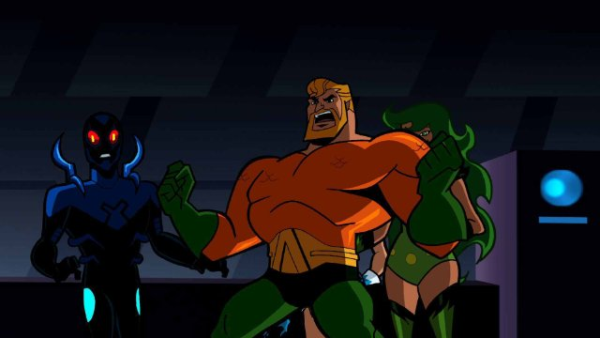 Aquaman gets angry in Batman: Brave and the Bold - DC Comics

Aquaman gets a bad rap for being useless, but here is one thing he’s probably known all along if we just bothered to ask – you should use ear drops to treat swimmer’s ear, rather than antibiotic pills.

Swimmer’s ear (acute otitis externa) is often caused by water being trapped in the ear canal between the eardrum and the outer ear (those big flappy things you can see). The trapped water makes the skin soggy and predisposes it to infection. A skin infection here can result in painful swelling, reduced hearing and the typical anti-social results of infections such as smelly pus.

While at the first sign of an infection we might want to pop some pills, in the case of swimmer’s ear, it is better to go for ear drops instead according to the newly released guidelines from the American Academy of Otolaryngology – Head and Neck Surgery Foundation. This recommendation doesn’t discourage the use of antibiotics entirely, it just recommends the use of topical treatments like ea drops that deal with the infection directly.

The two big reasons behind this recommendation are:

If you are super unlucky enough to have your swimmer’s ear infection spread into the bones in and around your ear, then you’re probably going to require some heavy duty drugs to combat that, but that’s the kind of actual pain and general inconvenience that would ensure you get admitted to hospital for.

Ear wax is perhaps our most maligned bodily creation. Ear wax protects the ear canal from infections like swimmer’s ear since the wax is water resistant, as well as being acidic, which inhibits the growth of bacteria and fungi. Ear wax is also quite good at collecting dirt and pollen and preventing it from getting in your ear canal where it can do some damage.

Occasionally the ear wax in our ears can get a little excessive and this can impact on hearing quality, but rather than try to get the ear wax out with sharp pointy things or chemicals, just ask your GP to examine your ear instead. It’s what GP’s do – they don’t say it, but they love to get that little fancy ear torch (otoscope) to shine light on your ear canal and look around at your insides.

If you have too much obstructing ear wax, your GP will help you get rid of it without having to stick sharp pointy things in your ear, they will also check for any actual infections – as opposed to the self-diagnosed ones where you go search Google for “My ear feels funny” and some website says you have a brain tumor.

So if your ear feels funny, don’t poke it with sharp pointy things, see your GP. If you have an ear infection, don’t take drugs, take ear drops instead. Aquaman says so.