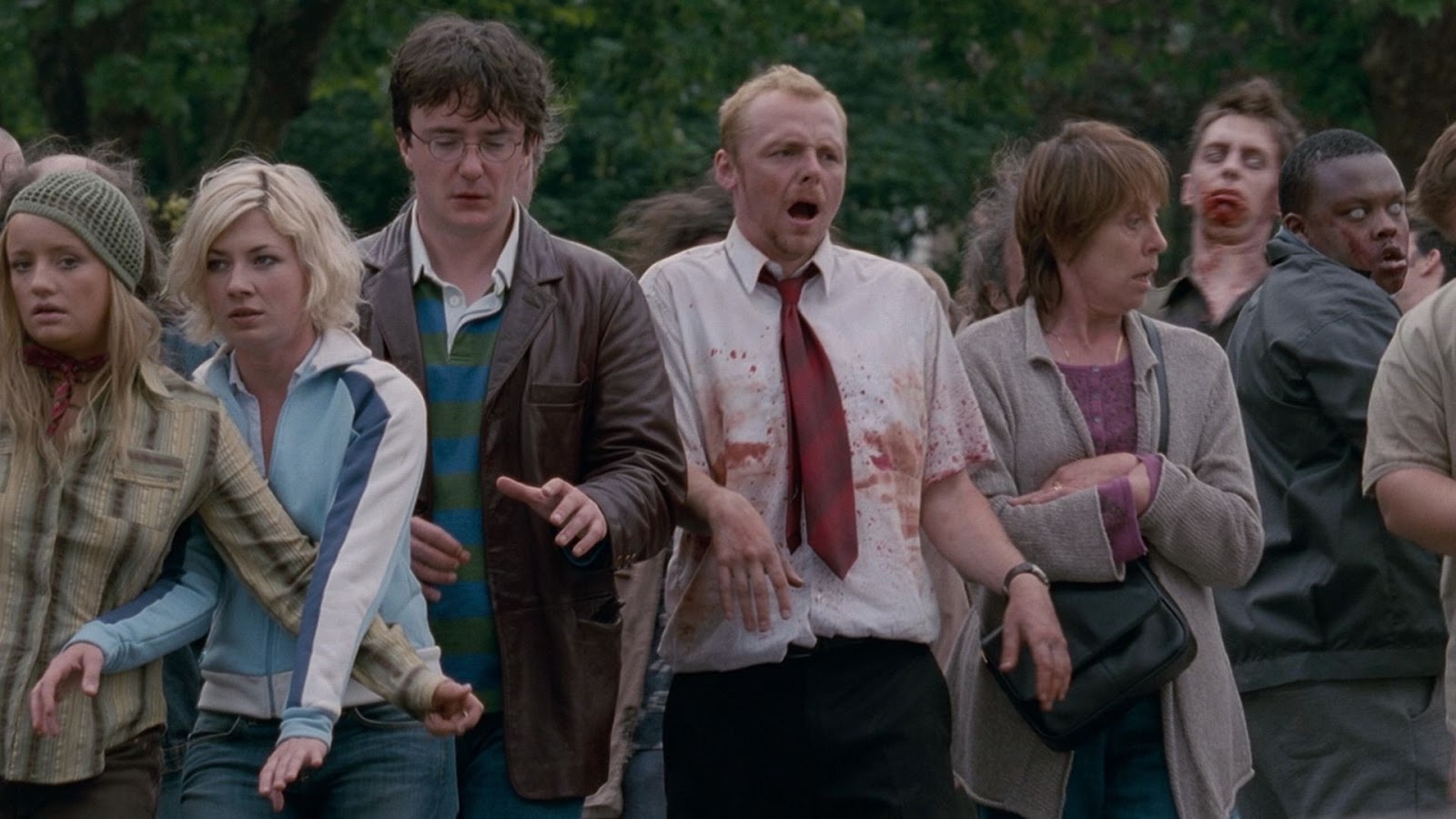 Shawn of the Dead - Just trying to fit in

In some parts of the world, today is Labour Day. If you are an oppressed worker and don’t get today off, the best cure for a bad case of Mondayitis is some Working Class Geek.

Normally, working class playlists include old classics like The Internationale, or a bit of Bruce Springsteen, Huey Lewis and the News, Jimmy Barnes. Alternatively there are classics like Dolly Parton or Mick Jagger chasing some poor kid down the street, but none of those songs are particularly geeky.

So instead, this is a collection of the Top 5 most not immediately apparent working class songs in geekdom.

Want to skill the quirky commentary and go straight to the playlist? Then check out the Healthy Geek playlist collection.

This is number 5 because it is actually pretty immediately apparent as to why this would be a working class song. But as far as symbolism goes, there isn’t much better than the opening sequence of Joe Versus Volcano. In fact, it would be hard to find a part of this scene that isn’t a metaphor for the soul-destroying nature of industrialised work – from the orderly gridlock on the parking lot, to the factory that looks like a face eating its employees, to the completely pointless pathway to the factory that zig zags it’s way there in the first place – this pretty much sums up working life for a many people.

Something to sing when you feel like you are being micromanaged at work.

On the surface (*zing*!), The Hunt for Red October might look like a standard Tom Clancy action movie, but it’s actually about a bunch of poorly paid submariners suffering through bad working conditions.

Not only do they have stressful job in which the air conditioner is frequently not working, the head of HR is on the side of management, while the food is terrible because the Chef was not appointed on merit but because of a case of “jobs for the boys” with head office. Their immediate supervisor is generally an OK kinda guy, but he’s only really middle management so it’s difficult for him to do much to protect them from the predatory behaviour of head office.

In order to build a little team spirit, the Captain takes them on a little company boating trip for a little sing along.

Unfortunately, a whole bunch of Western governments recently passed some draconian anti-terrorism legislation that allows them to record anything and retain the metadata for 2 years. As a result, their little comradely song about workers rights is swept up by the secret service and they all lose their jobs

Something to listen to when you stand up to your boss for inappropriate behaviour, or when they set unrealistic deadlines.

Jabba has a few emotional problems that prevent him from forming productive emotional attachments. As a result, anyone he cares for is either chained to his repulsor sled, or frozen in carbonite to prevent them from leaving.

The original version of this song is really just a metaphor for the ever escalating cycles of oppression and resistance within our consumerist capitalist society. Jabba seeks to find emotional security through the domination of others, but his domination will always eventually result in his victims rebelling against his oppression means he will never be secure. Its a cycle that constantly repeats itself but ultimately never benefits anyone.

A society based on oppression will inevitably result in a revolution. Jabba could have avoided being strangled by an employee on his luxury sail barge by providing for better working conditions and respect for the human rights of his employees.

Unfortunately with the remastered version of this scene, the tone was changed, as was the song and a completely redundant character was introduced to push the female singers to the background. The main purpose being to distract new viewers with bright flashy lights and a slightly offensive caricature of James Brown that it was hoped would encourage us to buy more stuff.

Something to listen to when a college gets a promotion and you feel like you are going nowhere.

Although the symbolic connection between zombies and our attitude to our working life is a recurring one, this one is not immediately apparent as it is a How It Should Have Ended for Resident Evil that included a short song that was then turned into it’s own clip that I am now using as a reference to working class struggles.

Then the military industrial complex comes in and destroys all our dreams for brains.

Here’s one to listen to on the way home from work – particularly if you have a cat to feed and/or need to buy milk.

Here’s one to end on that is a little more upbeat, and nothing is more upbeat than a race of enslaved aliens released from bondage by crashing on Earth only to find trouble fitting in due to racism. The revolution doesn’t end when you brake the shackles of employment bondage, it just means you have to redefine what your place in society is again. One thing is for sure though, those Newcomer aliens definitely found a niche role in consuming any sour milk, thereby reducing food wastage. We should also take their example of avoiding supplements and getting all the calcium we need through a balanced diet.

For the full playlist, check out Healthy Geek’s playlist collection.

16 Tons Alien Nation Brains Bruce Springsteen Calcium Dolly Parton How It Should Have Ended How to make friends without chaining them to your repulsor sled Huey Lewis and the News Jabba the Hutt Jimmy Barnes Jobs for the Boys Joe Versus the Volcano Mick Jagger Mondayitis Motivation Oola Resident Evil Star Wars: Return of the Jedi The Hunt for Red October The Internationale Work Life Balance You can't solve relationships with people by freezing them in carbonite Zombies