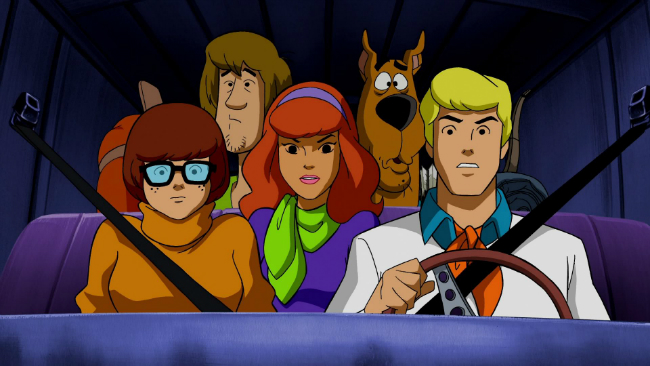 Scooby Doo, Where Are You!

All 17 episodes in the first series roughly followed the same plot structure of having the Scooby Gang show up in their psychedelically coloured van (the Mystery Machine) to investigate mysterious involving supposedly supernatural creatures. After a series of hi jinks and shenanigans, the mystery is revealed to be the result of someone in a mask who curses at being found out by “those meddling kids”.

The term “Scooby Gang” or “Scoobies” was revived with the TV series Buffy the Vampire Slayer (1997-2003) when it noted in Season 2 by Xander Harris, the most consistent member of the Buffy Scooby Gang, that their adventures seemed to match those of the original Scooby Gang. Only instead of solving a mystery to find someone in a mask, the Buffy Scooby Gang was often required to eliminate actual demons, vampires, ghosts and other supernatural villains. Often with violence involved.

For a bit of a crazy cross-over, Sarah Michelle Gellar who plays Buffy Summers would go on to play the role of Daphne Blake in the live-action movie of Scooby Doo (2002) and Scooby Doo 2: Monsters Unleashed.

A Scooby Gang is a person’s core group of close relationships with which they go on to achieve great (or not so great) things.

Whereas religious conservatives would insist on telling you that your Scooby Gang must consist of a mum, dad and 2 to 3 children, your actual Scooby Gang is a lot more diverse since it is a closer reflection of the nature of human social interactions.

So while your Scooby Gang might include biological relatives, it can also be made up of friends, co-workers, your lover/s, comrades, squad mates, classmates, gang members etc.

Just like the original Scooby Doo, you can also include animals in your Scooby Gang – or in the case of Crazy Cat Lady, you can make your entire Scooby Gang consist of cats. With the advent of technology we are possibly also heading into a future where a particularly intelligent piece of software can be a member of your Scooby Gang.

Just like the original Scooby Doo and its later Buffy incarnation, a truly effective Scooby Gang has a common cause or purpose behind the regular hi jinks and shenanigans they engage in – though whether those hijinks include unmasking criminals or fighting demons and vampires is ultimately up to your Scooby Gang.

Maintaining close social relationships with anyone is rather time consuming, so there is an upper limit of 4-5 people per Scooby Gang. Many Scooby Gangs are still effective with just 3 people, though any less than 3 and you lose the critical mass required to have a Scooby Gang – 2 people is just a Dynamic Duo.

“I’ll marshal my Scooby Gang and we’ll get to work on it.”

“I think we should recruit a clean freak to this Scooby Gang because this place is a mess!”

Life Lessons from Game of Thrones: Look after your direwolf (or your dog) for good health