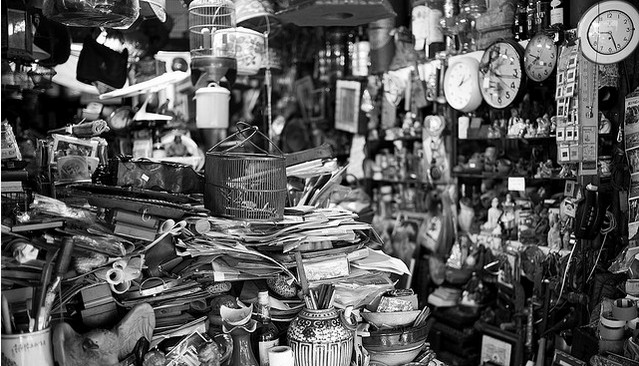 This is part two of Looking for Resolutions in all the Right Places, in which we look at the top 10 most commonly chosen New Year’s resolutions and see if they are all that and a bag of potato chips.

According to Statistic Brain, “Getting Organised” was the second most popular resolution of 2012. Given the low rate of success at keeping New Year’s resolutions, it is probably consistently popular because we aren’t so great at keeping to it.

The whole “get organised” craze is a little close to my heart, professionally speaking at least. At the risk of tooting my own archive box, I’ve worked almost all of my professional career in records and information management. It’s a profession which has enabled me to travel the world, fight crime, and participate in highly complicated, yet extremely well-timed adventures to save the world by solving a series of clues hidden in the archaeological ruins of lost civilisations.

I may have been exaggerating the level of excitement (and international impact) with that last statement, but essentially I spend a lot of time helping people organise their information better – I also spend a lot of time cleaning up the mess that arises when they don’t. Or as Forrest Gump once said, “life is like a box of chocolates you never know what kind of freaky things someone will put in an archive box”.

Well ok, Forrest Gump was actually talking about life in general, but the analogy is almost the same (and I did have to sort through records stored in chocolate boxes once so it’s not such a farfetched analogy).

You could run an Oprah marathon purely on episodes that deal with ways to get organised, but I’m just going to focus on the three main tips that I’ve found to work the best in terms of converting people from being totally stressed out to being cool, calm and collected members of utopian society. These tips are particularly applicable to sorting out your records and information, but they also apply to being organised in general.

Step 1: You tell yourself you don’t have time to sort through your mess so you just dump it somewhere unsorted and unloved.

Step 2: You then need to find something in the pile of mess you have been accumulating but because it’s not sorted you waste half the day looking for it.

Step 3: Because you’ve spent half the day rummaging around for something in your pile of mess, you have even less time to sort through it properly. You’re also so time-pressed that you feel you don’t have time to stop yourself from adding more unsorted stuff to the pile mess. 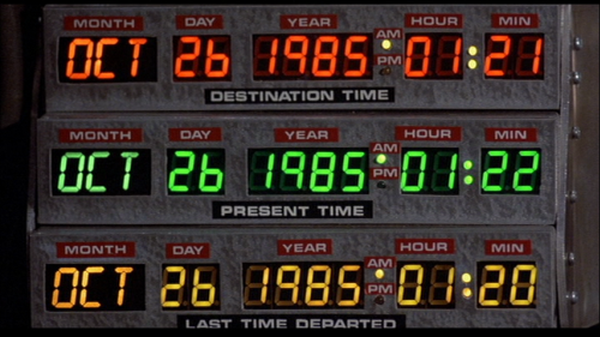 Back to the Future – Universal Studios

Whenever you dump anything unsorted in the corner of the room, in a drawer, on a network drive, or in the bathtub (if you have no shelves left) you are creating extra work for yourself later on. This is effectively like getting into a time machine, travelling into the future and slapping your future-self over the head since future-you is the one who has to waste time cleaning up after yourself.

Whenever you pick a future date to ‘start’ getting organised, all you are doing is strapping yourself into that Discombobulatory Time Machine of Pain, powering up the flux capacitor and picking a date to ‘start’ slapping your future self with over the head.

If you need some inspiration to just get on with it, just watch this.

Tip 2: Stop being a Size Queen and break it down into manageable bits

After watching the above clip and feeling totally motivated to wear a handlebar moustache and start organising your life, you need to be sure you don’t sabotage yourself in the first few minutes by being intimidated by the size of the job you’ve set yourself. This is a thought process I like to call The Size Queen Spiral of Intimidation:

Step 2: You then pick a totally woolly-mammoth-massive job to start with to completely transform your life.

Step 3: Reality sets in, and you take one look at the woolly mammoth standing over you and feel completely intimidated. You then give up because it’s all too much work and you don’t have the time!

The problem here is perception. The “Do it!” methodology doesn’t mean you have to do everything all at once, it means you do something right now. Stop being a Size Queen and obsessing over the size of the woolly mammoth of stuff that needs to be done, that will just make you depressed. Instead, you need to break your woolly mammoth into smaller, bite-sized tenderloins to take on instead.

So don’t focus on the 12.7 Gigs worth of data you need to sort through, just start off focusing on 10 files today. Don’t try and clean the entire shed in one hit, just clean up one corner. Don’t focus on the 10 years worth of ‘adminstration files’ just focus on organising one project first.

My personal favourite ‘do it’ task is to clean my desk. The psychological benefits of a clean workspace are worth an article in itself, but cleaning your desk is a very small and simple task you can do to get the ball rolling that will put you in the pro-organised frame of mind. While you are at it, get some of those alcoholic wipes and wipe down the keyboard and kill a bunch of bacteria while you are at it. (Just don’t go all Howard Hughes and become obsessed with killing all bacteria since that would be really counter productive).

Tip 3: Stop being a Borg Queen and who is obsessed with perfection

So while you are resisting the urge to be a Size Queen by breaking your goals into smaller achievable tasks, the next thing is to stop being a queen of a different sort. Don’t be obsessed with perfection like the Borg Queen.

Step 2: Then you hear about all these really cool software tools and other trinkets that someone else has. Or you hear about some complicated legal requirements or the horror stories of what can go wrong if you don’t do it right.

Step 3: You then start to feel inadequate that you don’t have the resources to get organised or it all sounds too complicated decide you need to wait more time before doing anything! 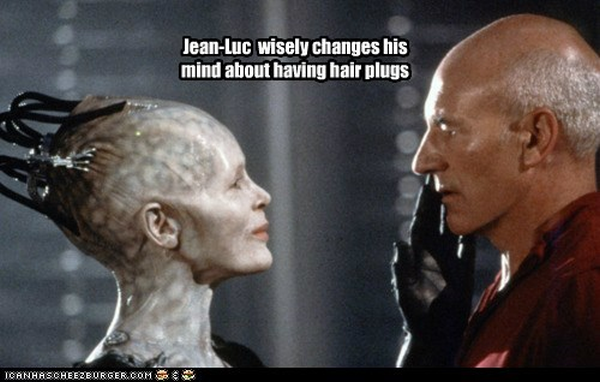 This thinking is circular – you don’t have the time to organise anything, but you have plenty of time to continue to work ineffectively until this magical moment when you suddenly have something really cool that will organised yourself for you.

The truth is no one is perfectly organised. There is no shiny software tool, expensive consultant, or episode of Oprah that will make you magically organised. These are all just tools – they can help you, but just as an overweight man doesn’t need to wait till he’s got a skin tight Lycra body before he gets on a bike, you don’t to wait till you have all these fancy tools to start being more organised.

Never underestimate the power of habits – they can ensure you are perpetually burdened with piles of paperwork, or send you to the heights of being ballroom dancing champions of the Pan-Pacific Grand Prix.

Most ‘bad’ habits that result in being disorganised come from one of three dirty thoughts:

lol – no you won’t, you’ll just dump it in the pile with all your other crap. Go back to Tip 1 and Do it!

If you don’t need it now, and you can’t think of a concrete reason and time when you will need it in the future then you probably won’t need it – ever. The more crap you accumulate that harder it will be to find the useful stuff.

A little disclaimer: a good concrete reason you should keep something is because you are legally required to do so. A good example of this for individuals are tax returns (and associated receipts) which you should keep for a minimum of 5 years after that particular tax year has been settled with the tax department. The idea here though is that you are supposed to go find out what you should be keeping, then keep it for as long as you are required, then destroy it. This doesn’t mean you can say “I think I need to keep this because I think there might be some law out there that says so but I haven’t bothered to check one way or the other”.

If it’s not fixed in a month, you will never fix it. Give it away or sell it if you can. In the meantime it’s just taking up space and acting as a good hiding space for evil leprechauns to take up residence and plot to kill you in your sleep (the leprechauns link is my contribution to St Patrick’s Day).

So those are the main bad habits, but you probably have plenty of other filthy ones too. The trick now is to identify the situations when you start thinking these filthy thoughts and then work on eradicating them one by one and replace them with good habits instead.

This bad-habit-good-habit tip is ridiculously similar to the one from New Year’s Resolutions: 3 ways to lose weight because the same parts of your brain that form bad eating habits also dictate why you have bad habits at being crazy-loco disorganised. So even if you don’t need to lose weight, check out that article to find out more about changing habits – and why David Attenborough is so much better than Kevin Costner.

There is a problem with the whole ‘get organised’ resolution. It assumes that there is a thing or a state of being that you can attain called “organised”. In reality there will be no point at which you attain enlighten-organisation-ment in whic you ascend into a perfectly planned state of being where everything is labelled correctly.

A better way of thinking is that being organised is way of thinking more conscientiously about the world and how you interact with it. If someone litters on the street they are seen as a bit of a tosser (in both senses of the word) since it is pretty clear they don’t value their community much or the impact their littering has on the rest of us. Likewise, if you just randomly toss your possessions, information and time spent with people around all over the place, you are effectively telling everyone else you don’t value any of those things either. If you don’t value anything, you run the risk of coming across as a tosser. If you are being a tosser, it’s generally better for your social life to put a stop to that one sooner rather than later rather than wait till January 1st.

Should “get organised” be on your next set of New Year’s resolutions? NO! Don’t wait for the New Year to stop being a tosser, start now!