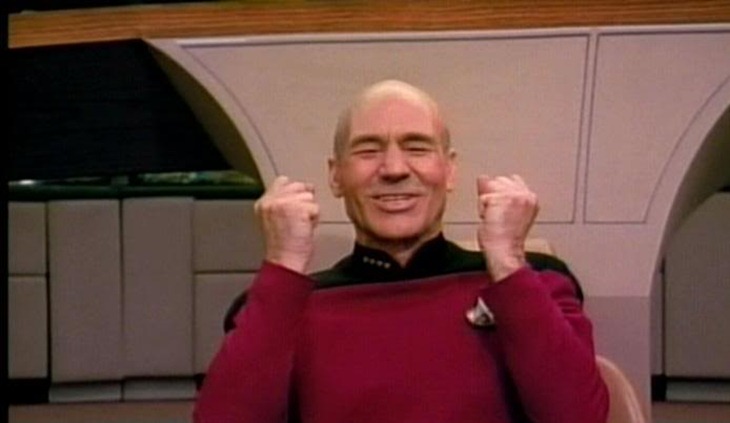 This is part six of Looking for Resolutions in all the Right Places, in which we look at the top 10 most commonly chosen New Year’s resolutions and see if they are all that and a bag of potato chips (so to speak).

In a previous New Year’s resolutions article “enjoy life to the fullest” I declared in the first sentence that I thought the whole premise was a little lame.

Well this time I’m going to suggest that the premise of this New Year’s resolution “learn something exciting” is also a little lame, only I’ll do so in the second sentence instead.

You don’t actually want to learn something, you just want to impress people

Learning anything is great. We should all be learning new things all the time. However, this resolution says we have to learn something exciting – and then in typical New Year’s resolution vagueness, doesn’t really go on to specify much else. So for example, when I learnt that there was a Kaidan Alenko inspired hoodie and matching t-shirt from Bioware, I was excited. Bam – New Year’s resolution success right?!!Probably not. What people really mean when they add this resolution to their list is that they want to learn something that will impress people.

So when I say I learnt something exciting and go on to babble on about how cool I’m going to look casting Bubbles of Pain in my Kaidan inspired clothing, you’re probably not going to be all that impressed. Either because you didn’t play Mass Effect at all and therefore have no idea who Kaidan Alenko is. Or you were foolish enough to choose to save Ashley Williams on Virmire in Mass Effect 1, even though she is a religious xenophobe who is completely obsessed with your character and will boil your pet bunny (and kill your favourite Krogan) if you aren’t careful…

This New Year’s resolution should really be “Learn something exiting that will impress people”, which often means one of the following:

1. Learn to speak another language fluently

2. Learn how to master a musical instrument

The problem with learning exciting things is that it’s… well kinda hard… and time consuming. You aren’t going to do any of those things in 12 months. The good news is that if you just want to impress people, you don’t have to actually do any of them properly – you just have to fake it!

1: Learn to pretend to speak another language

Based on the quality of most Facebook status updates, many of us struggle to master our native language, let alone master another one. So first step to impressing people with you language skills is simple – learn the difference between “there”, “their” and “they’re”.

If you really want to branch out into being more exotic, you need to expand your vocabulary beyond the relative safety of something like English and take a trek into deepest darkest Hyperboria – or some other country that may or may not exist.

Chances are, you aren’t a polyglot and are just an ordinary kinda person who’s ability to fluently pick up a new language has been biologically hampered since puberty. Sure, you could learn a language the hard way – go to language classes, study a lot, practice a lot, then practice some more, then keep practicing and practicing forever. If you keep at it, forever, you might be able to engage in casual conversation with someone who speaks your chosen alternative language and they might even be able to understand you without laughing too much at your funny accent. But if you only want to learn a language to impress people, then spending all that time learning the language is time you aren’t spending impressing people!

The wonders of Google Translate make it a relatively easy task to pick some random words and turn into your very own personalised exotic sounding phrase. Of course, it’s probably not going to work so well on someone who actually speaks the language you are trying to imitate, so it’s probably best to only use it on people who are less culturally aware than you are. On the other hand, if anyone realises what you are doing, you can also just pretend you are being all artsy and it’s an ironic critique of the anglo-centric nature of modern society in which most English speaking people are largely ignorant of other cultures and languages.

2: Learn to credit those who can make music with YouTube

I often find myself thinking it would be really cool to be able to play the cello because in movie soundtracks it sounds all dramatic. Just like these guys.

Unfortunately this 4 minutes of cello greatness is actually two lifetimes in the making. The two cellists in this clip, Luka Sulic and Stjepan Huaser have been playing since they were kids, been to all the really cool music colleges of the world and won a bunch of competitions all over the place like the over-achieving eager beavers they are. I will never ever be as good as these guys – and quite frankly neither will you, unless you are either Luka Sulic or Stjepan Huaser and happen to be reading this…

If I critically assess my motivations for wanting to play the cello however, I can admit that what I really want to have is the ability to have dramatic, yet situationally appropriate background music play on cue at moments in my real life, just like these guys. The problem being that this requires video editing, by which time the moment is lost and is more likely to end up like this.

The reality is, I don’t even have the time or the skills to edit my own YouTube videos to a standard I would find acceptable – all I did with these clips is trawl YouTube for other people’s work. Which is exactly my point – I can appreciate the ability of other people to create music and YouTube clips without needing to possess those things for myself.

Therefore, if you can’t go out and learn how to these things yourself, the easiest way to impress other people is to post YouTube links on your Facebook profile instead! Demonstrate you are a cool teenage kid living for the now and bring a little bit of entertainment to the other people on your friends list by posting something that is done well, show your appreciation by linking to the original author of the content. More importantly, make sure you demonstrate you know the difference between “there”, “their” and “they’re” in the accompanying text comment.

3: Learn to appreciate the culinary efforts of others

Often when we say we want to be able to cook like a chef, what we really mean is we want to prepare a feast that everyone falls over themselves complimenting us on our great skills. Then they throw rose petals at our feet and we get a triumphant parade in our honour and are awarded a golden wreath and there are trumpets and wild gestures of joy from all the peasants across the land…

In reality, instead of wild gestures of joy from peasants, you are probably more likely to get disinterested grunts from life-zombies, nit-picking from sooky-la-las, and/or a lot of dirty dishes to clean up afterwards courtesy of the lazy-buggers.

If we are honest with ourselves however, we can admit that we have all been guilty of being a life-zombie, sooky-la-la and/or lazy-bugger to someone else’s attempt to cook – are are currently doing it right now. The thing is, appreciation begets appreciation. So if you want people to appreciate your cooking efforts, you’re going to have to start appreciating other people’s as well.

Rule 1: Don’t be a life-zombie

If someone goes to the effort to make a meal for you, don’t grunt your way through it. Take an interest in the process they went through to make it and listen to their response. If you are really keen to cook like a pro, you’re going to need to pay attention to what other people are cooking and learn from it anyway, so here is a good start. Who knows, you might actually learn something!

Asking about someone’s effort is not the same as picking it apart. If someone has gone to the effort to make you dinner, of course they are going to do it differently and/or use different ingredients – that’s the point! Try something new, you might actually like it e.g. I went through most of my life thinking I didn’t like pumpkin, but when I gave it a decent go it turned out it wasn’t such a bad thing after all, particularly in a roast. Mmmmm roast….  In any case, if you’re going to go around pulling that scrunchy nose face of disgust saying how you don’t like everything, you are going to look like a wanker – try pulling that face in the mirror, it’s not very attractive.

Rule 3: Don’t be a lazy-bugger

After eating everything on your plate, place your knife and fork together at 10:00 like this:

Michael Procopio – Food for the Thoughtless

This means that you are “done”. In a domestic situation, this is also the part where you go do the dishes in exchange for someone else doing all the cooking for you. If you are in someone else’s house, it might be a little intrusive to just march on into the kitchen and start cleaning up, so instead this is the part where you complement the cook.

I should also point out that these are the social niceties that you have to volunteer first without expecting them in return – at least not straight away. So if you go make dinner and other people aren’t following these rules of appreciation, if you go and get all snooty and demand it, you’ve single handedly used up all your social credit from that situation since you’ve just demonstrated that you are just fishing for complements which is like saying “look at my greatness and adore me!!!”. If all you are getting are life-zombies, sooky-la-las and lazy-buggers, then it just means you need to only prepare meals for people who are willing to appreciate you. They’ll eventually get the message and either change their ways or just start cooking for themselves.

If you REALLY want to learn another language, learn a musical instrument and/or learn to cook like a pro, then do it! Just remember it’s a life long commitment that will take longer than 12 months so writing “learn something exciting” on your New Year’s resolutions isn’t going to cut it really.

On the other hand, if you just want to impress people, just fake it.

Should “learn something exciting” be on your next set of New Year’s resolutions? No – learn to appreciate the skills of others instead!